Is there a right time to move…? 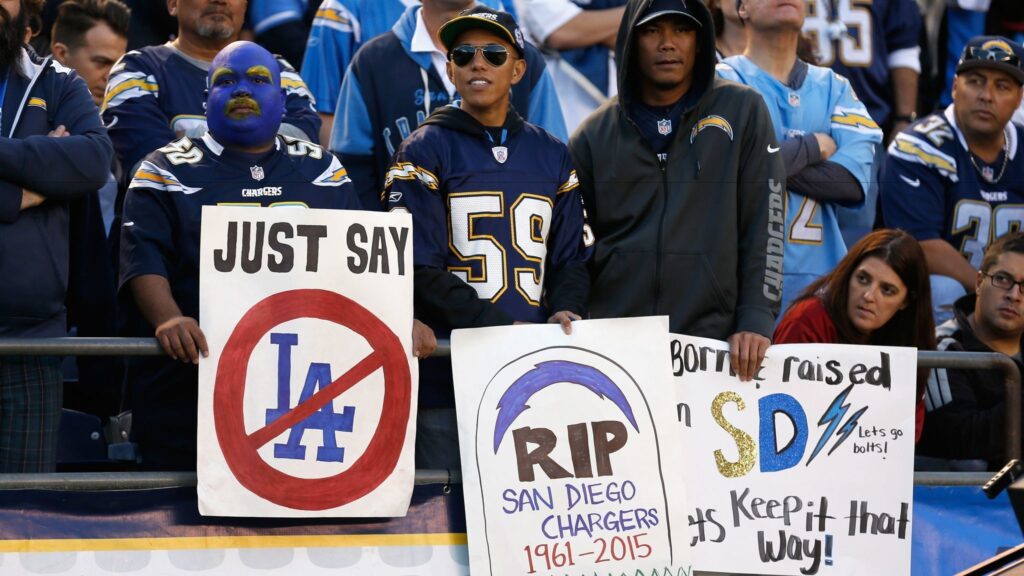 In an era where sports franchises are all about money, growth, deals and big business, all voices against team relocation sound ancient and out of sync with our times. And although it hurts me to see the Chargers movin’ outta San Diego, or the Sonics move away from Seattle, I will not be that grumpy old person who doesn’t want the vase moved from the kitchen table because its been there since 1967.

But moving for the sake of moving, or moving just because ticket sales are trending downwards, is not always the answer. There have been plenty of cases that proved both situations true. Baltimore was down and out in the mid 80s, so the Colts went to Indy. But the city needed a team which they got back almost 10 years later from (who else but…) Cleveland. The Browns history though was kept in tact and the team was eventually reestablished, while ending a 15 year circle of NFL football teams playing musical chairs across state lines. That’s one of the few narratives where eventually everybody ended up at least happy.

This is the year of California football though. Los Angeles got not one but two teams. And Oakland looks like they’re gonna lose one and are walking away from another that just had a new stadium. But let’s start with the obvious.

Even a blind man can see that the Rams homecoming hasn’t gone quite as planned. Although the team is playing well and winning in impressive fashion, with a young coach, fans haven’t embraced the move so far. Empty seats at the Colliseum remind us of the old USFL games or the early 90s Raiders and Rams debacle. And lets not start with the Chargers, who provide a home -away from home- for every team that visits LA to play against them.

Of course there’s the easy and obvious point here. Both these teams came to LA with the promise of a new stadium that will fix (?) everything. But let’s be honest. Although owning a new stadium is a big deal, it’s not the mother of all cures. Just ask the 49ers who have seen both attendance and home court advantage diminish since moving to Santa Clara.

For LA, the explanation is obvious but nobody wants to face it. Los Angeles had, has and will have a football team. Problem is that team is not in the NFL. Just go out and ask how big the USC Trojans are in the region. They feel like that’s the title provider, the star nursery home, the big storied school. And mostly they are right. And for those who don’t like Snoop on the sideline or Pete Carroll pickin’ the next NFL star, there’s always UCLA, another college powerhouse, that is regularly attracting the LA crowds.

Just don’t forget. Los Angeles is a big city with people who don’t have a real connection with all its problems or tradition, with a culture that leans more towards art and entertainment (cheap reality entertainment lately) rather than traditional sports that beg for winter weather. And if they want sports they got the Lakers and their new-kind-of showtime. With Magic back into the fold and Lanzor Ball (the Lavar–Lonzo tandem that has taken over the Staples Center) ready to feed the hungry headlines.

So now what? Move back? Of course not. To mark the words of the late George Harrison “it takes patience and time to do it right”. But a lesson has to be learnt here: Moving out of town is sometimes the easy way, not the right way or the wise thing to do. And at the end of the day, the ones who should have at least something to say are the fans. They’re the ones who lose sleep on loses, who spent their money on tickets and merchandise, they’re the ones whose heart breaks every time an owner strikes a lucrative deal.

All this talk can reach new heights as we move towards the 2017 season play-offs. All the whispers, complaints, distress can set into the darkness. “How?” you ask… Well, it’s simple. What if the Rams and the Chargers end up in February, in a historic battle of LA in Super Bowl 52? That unprecedented matchup would cement those teams’ presence in Hollywood while expanding their fanbases and eventually spark a real LA pro football revival. The way both these teams are currently playing suggests that this could really happen!